Three images of lighting, the best from last night’s storm, and on some level some of the best I think I’ve ever shot.

I’m currently neck deep in writing a review for Canon’s 5D mark III–yes I know, I’m a bit late to the party, especially since I’ve had one for more than 2 years now–but in the meantime there were a couple of nifty bits of gear I wanted to talk about and get the word out on.

The first up is Peak Design’s Anchor Links. Camera straps are a pretty big frustration for me. I vacillate between needing a strap and not wanting one, and I do this often enough that quick release systems are the name of my game. The problem with most quick release straps is that the tend to leave big bulky ends on fairly long tails attached to the camera.

For the past 2 years or so, I’ve been using Optech’s Mini QD Loops, which I reviewed. It’s nice, it’s small, the only problem I have with it is that it feels incredibly flimsy, even though it has a 50-pound break strength (and I’ve tested mine to close to that).

I had contacted them at the time to see if they were offering just the quick release bits instead of having to buy their whole strap. Sadly last year they weren’t. Now, that’s changing. Currently they are offering the strap anchors through a Kickstarter campaign (ends August 15th), then they’ll be going on sale through their website in general.

I’ve preordered 2 sets, which according to Peak Design’s Kickstarter page, I should get sometime in late October. I really hope these are all that I imagine them to be, as they really do look like the solution to my camera strap frustrations.

The second item I want to note is 3D Printed Idea’s updated bayonet adapter for Lee filter holders. I reviewed the first version they did, which I generally approved of, but it turns out after I had published my results, they discovered some issues with the all 3D printed construction, and subsequently pulled them from production.

In the meantime, they designed an all-new adapter, this time for Lee’s holder design, which I consider to be much better than Cokin’s anyway. The new design utilizes an aluminum outer bit with a 3D printed mount adapter.

I’ll be writing up a more detailed review and test of the 3DP Idea’s adapter in near future, but suffice to say I’m even more impressed with this design than I was with the previous one. So much so, in fact, that I’m shelving the 3D printed holder slots I was working on since this adapter provides the same capabilities (3 slots on a 16mm full frame lens, without vignetting or having to remove a protective/UV or thin polarizer filter) for about the same cost in a significantly more robust way.

I see this question come up with some frequency on various discussion forums. What format should I use to future proof my digital images. The answers of course vary from JPEG, to DNG, to TIFF or PNG. Very rarely do I see someone who responds with don’t do anything, which is exactly what I recommend.

This may sound shocking, but let me explain. There are two broad aspects as to why I don’t recommend messing with your digital negatives now for future proofing reasons. On one hand, there’s the technological and technical side of digital storage and computers; on the other, there simply the time aspect.

Let me start with the time aspect. Doing anything that involves converting RAWs now is a waste of time for two reasons.

END_OF_DOCUMENT_TOKEN_TO_BE_REPLACED 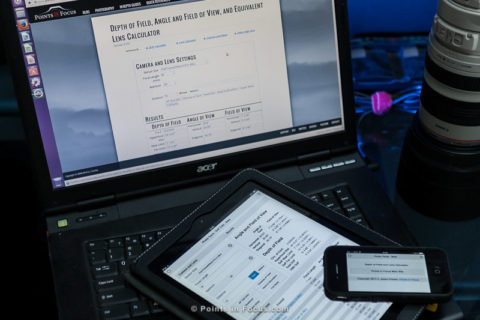 I started writing my JavaScript tools to provide me with solutions to problems I had. My depth of field calculator started out as a quick way to get 1/8-depth of field values that I needed for building an autofocus target. It grew from there in to a way to compare lenses across platforms with an eye towards maintaining a fixed composition, i.e. the same angle of view and depth of field. One thing that’s always slightly annoyed me with these tools is that they only live online.

The trouble is, developing applications for mobile devices (phones and tablets) is quite a mess. The 3 major platform all use different environments, APIs, and programming languages; Microsoft uses .NET, Apple uses objective-c, Android uses “Java”. Of the three options I have the most experience with .NET, but as a user I have Apple’s iOS based devices. Even then there are associated costs with bring an app to market on any of the respective platforms. Never mind which one do I target? Apple’s iOS because it’s what I use, or Android because it’s the most popular? Or do I try and find a cross platform toolkit of some kind?

Thanks, but no thanks.

There is another option, HTML 5. All the mobile phones support HTML 5 at this point, at least in the browser, if not though some mechanism that frames the “app” as something more “native”. And HTML5 supports an offline caching mode that can store all the relevant files on the device so the app works when there’s no internet connection. Okay sure, the experience isn’t quite as good as a native app, but right now that’s a compromise I’m willing to make for the sake of getting things done. Moreover, since my tools are already entirely based on JavaScript and HTML 5, it’s relatively painless for me to port the existing tools and roll out new ones as I find things I need.

Which brings me to why I’m posting this. I’ve rolled out the first early release of my offline capable HTML5 tools. The first tool is a direct port of my depth of field and equivalent lens calculator. It uses the same underlying code as the existing tool, it’s just packaged up so you can book mark it (or if you’re an iOS user, add it to your home screen), and use it anywhere any time you need it.

I still consider this to be a beta class product, as I’m still rolling out the documentation and refining the functionality. It’s currently been tested in iOS 7.1 and should support running as a full screen app. Simply visiting the site should download and cache the content required to run the application offline. Help and other documentation is still missing but is on the to do list.

Click the button below to go to the mobile tools landing page.

The other day, a friend of mine trying to free up some space on their computer asked me if I knew how to delete the JPEGs from a RAW+JPEG pair in Lightroom. After scratching my head on that for a while, I threw together a Powershell script to do the job, and so I’m sharing it here in the event it might be helpful for someone else.

This script is for Windows and requires Microsoft’s Powershell environment to execute. I’ve tested it in Powershell version 3 on Windows 7. If you don’t have Powershell installed, the latest version can be downloaded from Microsoft.

To run the script, place it in the top-level directory of the directory tree where you want it to scan; right-click on it and choose “Run in Powershell.” The script will prompt you before running whether you want to just build a list of files to remove or delete them. I recommend not deleting files on the first pass, just to be safe as the deletions done by this script aren’t reversible.

The script considers a JPEG to be part of a RAW+JPEG pair when the files have the same name but a different extension (.nef, .cr2, or .dng for raw, and .jpg for JPEGs), and exist in the same directory. The script recursively scans through every child directory starting from the directory the script is executed from looking for RAW+JPEG pairs.

Results are always logged to raw&jpeg.log in the same directory as the script itself.

Due to the nature of the process, the script can take some time to run, and doesn’t display progress unless it finds matches.

I recommend running the script and verifying that the files it’s selected to delete are in fact RAW+JPEG pairs, before deleting them.

This tool is provided without warranty or support.

When I first started with Radio Triggers you had basically two options, some cheap modules of questionable reliability that were marketed under a number of brands, and LPA Design’s Pocket Wizards. That was a scant 5 years ago, and since then the radio trigger marketplace has changed dramatically. Pocket Wizards, while still the Cadillac of radio triggers, have had their reliability and capabilities matched and in some cases beaten. In short, the question of which triggers are best has become considerably more complicated.

The simple reality is that there is now a massive number of competing radio trigger products on the market in every product space. The entry-level market, for example, is awash in similar products from various brands that have little if anything to differentiate them from each other. Almost all of the studio strobe makers have joined in the radio trigger market, producing triggers designed primarily to provide users of that manufactures strobes with remote power control and cordless triggering; though many of these systems also have generic modules available. TTL systems have become more commonplace, with a range of products from inexpensive designs to fully featured and integrated ones.

My intent here isn’t to recommend a product. What I use and what I need aren’t what you use or you need, and my solutions aren’t necessarily your solutions. Instead, what I’ve tried to do is cover most of the available systems and the pros and cons as I see them. You then can use this as a launching point to dig further into the solutions you find best fit your needs.