What’s there to say, it’s an SD card. It’ has all the standard features, like being made of plastic with a shiny label, fitting in an SD card slot, it even has the required write protect lock switch. All of which goes to say there’s really nothing to say about an SD card other than it’s another SD card.

In fact, the only reason I’m writing this is that I was surprised when I actually benchmarked the cards in my card reader to find that the 400x 32GB SD cards are actually pretty much just as fast as the 400x 32GB compact flash cards that make up the bulk of my storage. That is to say, they make 75MB/s reads and better than 40MB/s writes.

Sadly, smaller 8GB cards are considerably slower, which is unfortunate but expected due to the way that large flash cards are built. Even then, the 8GB cards cream the old 8GB 30MB/s compact flash cards I was using and are more than fast enough to record video from a 5D mark 3. 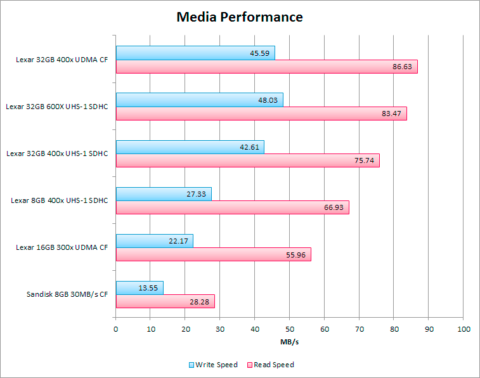 On that note, I’ll leave you with this thought, I’d still rather have two compact flash slots in my cameras, but considering the performance of modern SD cards, I guess maybe having an SD slot isn’t so bad.