There’s probably a number of us out there that are using Adobe’s Premiere Pro CS6 to edit video for indy level and zero budget projects; and as that usually implies there’s 0 budget for a professional graphics solution to get things flying. Fortunately while it’s not supported by default in Premiere, most Nvidia gaming class cards, i.e. the GeForce line, can be used for CUDA workloads. This is especially true for modern Nvidia gaming cards where even low end cards are more powerful than the high end cards that were enabled in CS6.

The default list of supported cards is stored in the file cuda_supported_cards.txt, in your Premiere Pro directory.

Premier Pro CS6 officially supports only the cards in that list, and while there’s no guarantee it will work, so long as your card is at least a GeForce 200 series or newer, it should be able to accelerate GPU enabled effects. On Windows, Premiere Pro CS5.5 and CS6 do not support AMD or Intel GPUs at all.

Creative Cloud 2014 improves the situation for AMD and Intel users. Adobe now supports OpenCL, a cross platform API that is implemented by Nvidia, AMD, and Intel in some form or another. Creative Cloud 2014 users, should be able to enable GPU acceleration using any Nvidia card newer than a GeForce 200-series, any AMD GPU newer than a AMD Radeon HD 6000 series, some AMD A10 APUs, and Intel’s Iris and Iris Pro iGPUs in their Haswell and newer CPUs. The officially supported hardware list for Creative Cloud is available here.

In a move I never would have believed, thanks to Danny in the comments, I’m updating this for an even easier way to implement GPU acceleration in Premiere Pro. It turns out, you don’t actually have to add your card to cuda_supported_cards.txt file. Instead you can delete—or rename the file if you want to keep the original—and Premiere will assume your card is supported and enable CUDA. 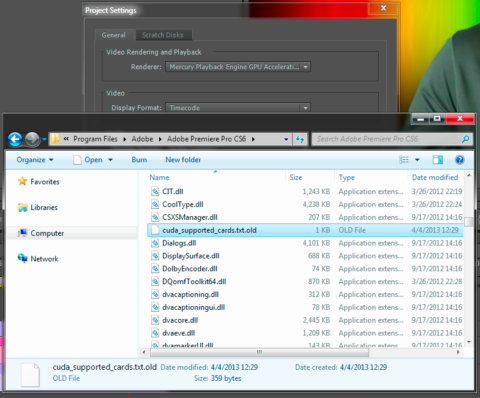 If this method doesn’t work for you, then you will want to use the following procedure to add your card to the cuda_supported_cards.txt.

Start by using the GPUSniffer.exe provided with Premiere to get the device name for your card. This may sound a bit redundant, as the device name is pretty obvious if you know what you installed, but Adobe is very specific about the name that’s used, including capitalization.

The program will spit out something that looks like the following image. 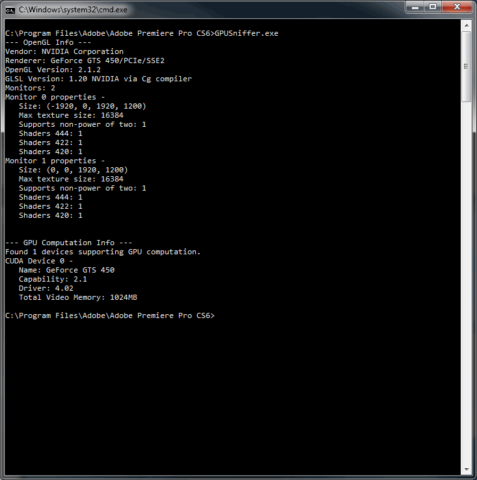 Look for what’s listed where it says “Name” under “GPU Computation Info” section. Copy that, and paste it into the end of the file cuda_supported_cards.txt. Premiere is case sensitive; the text must be capitalized exactly the same way it appears in the GPUSniffer output or Premiere won’t detect your card.

Save the text file, and that’s it; CUDA support should be available next time you start Premiere.

If you’re running Windows 7 or newer, you’ll need administrator permissions to save the file. The easiest way around this is to save the file to your desktop, and then copy it back to the Premiere Pro folder with explorer. When you do this, Windows will ask you for permission to to preform an elevated action.

You can check that you’re running the CUDA engine and rendering things on your GPU a couple of ways. 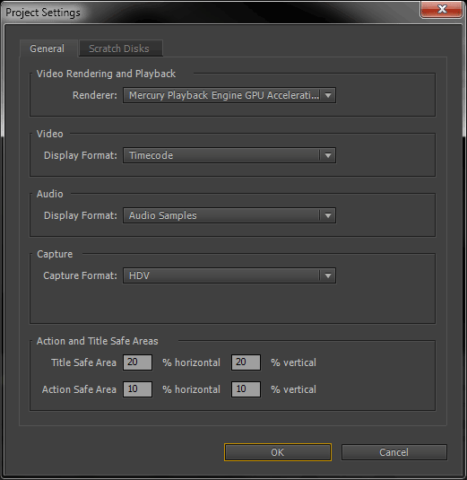 Secondly you can download a program like GPU-Z which can monitor and display GPU loads and watch that while playing GPU accelerated clips. By the way, GPU accelerated clips will be covered by a little yellow bar (instead of green, for rendered, or red, for un-rendered) in the time line.

Alternatively, if you’re running Windows 10, you can observe the GPU activity in the Task Manager instead of using a 3rd party application.

All this said, keep in mind that unsupported GPUs are not a free ticket to ride. Non Quadro cards still won’t be able to accelerate Speed Grade and this workaround doesn’t exist for it. Also remember that running in this configuration isn’t supported by Adobe. Best case, if you run into a problem some kind soul may unofficially help you. Worst, case you’ll have to deactivate the GPU accelerated render and see if the problem persists, or buy a Quadro and reproduce it under that. Finally, there may be quality issues related to rendering on consumer graphics cards that don’t occur on the professional ones due to variances in hardware.

In short, getting Premiere Pro running on a consumer grade GPU is a great trick for an indy or 0-budget production, but it comes with the potential costs of having things just not work and not being able to get official help for it.

Q: I added my card to the cuda_supported_cards.txt file, but it doesn’t work?
A: Make sure the card name is spelled and capitalized exactly like it is in the output from gpusniffer.exe.

Q: How do I copy text from the command prompt?
A: Select the text using the mouse like you normally would, then right click to copy the text to the clipboard.

Q: Is there a similar solution for After Effects?
A: Yes, you can add your card to ray_tracer_supportedcards.txt in the After Effects folder, and After Effects will accelerate ray tracing operations with your GPU.

Q: Does deleting the After Effects ray_tracer_supportedcards.txt file work the same as it does with Premiere Pro’s cuda_supported_cards.txt?
A: No, that doesn’t seem to be the case.

Q: What versions of Premiere Pro does this work for?
A: I’ve personally done this in both CS5.5 and CS6. It’s been confirmed to me that the same procedure applies to Creative Cloud as well.

Q: Will enabling CUDA support speed up my export times?
A: That depends. While Premiere Pro uses CUDA acceleration while exporting if it’s available, there are some limitations to what the GPU can accelerate and when it will be used. The big caveats are that GPU can only accelerate effects that support GPU acceleration. These are indicated in the effects panel by the GPU accelerated icon. If you’re using effects that can’t be GPU accelerated, then your export times won’t improve. Moreover, the GPU isn’t used for compressing the rendered video, so the usual limitations of say h.264 compression speeds will apply. For a more in depth look at export performance, you may be interested in my article looking at the performance aspects of exporting in Premiere Pro.