Not only is Beta 2 stable enough that I’m still using it, I’m actually using it more than Lightroom 2.6 at this point.

This is proving to be a tough nut for me to crack. In short, I like it, but it’s not quite that simple. For starters the new color noise reduction stuff rocks. It’s good enough to make a 1D mark 4’s ISO 102,400 almost usable.

That said, getting the most out of noise reduction in LR 3 is more complicated than it was in LR 2. What I have noticed is that I’m favoring using slightly higher luminance settings, lower sharpening and more masking in many of my images. I’m finding this necessary to bring out details while simultaneously keeping the backgrounds smooth and clean. For example, with my 1D Mark 3 I found that I could get away with no luma noise reduction in Lightroom 2, as long as I was shooting at ISO 400 or below. Lightroom 3’s new rendering engine tends to produce more grain even at those lower ISOs, necessitating some NR at a minimum.

Unfortunately, I haven’t made any prints from Lightroom 3’s output yet, and that may change things somewhat. Specifically, since prints tend to appear to have more detail when there is a small amount of noise in the image.

Publishing isn’t new to beta 2, it was there in beta 1, and provides an interesting if only somewhat half implemented (in my opinion) function.

In the default install, you can publish to a hard drive or to Flickr. Lightroom them manages the images and allows you to post and view comments to them without going to your web browser. If you have a Flickr pro account, which allows you to do in-place image replacements, you can also update images with development tweaks if you wish. Images that have been published also show their current comments in Lightroom’s Comment’s panel.

What hasn’t changed from beta 1, and I’m not sure if this is a limitation of Flickr or Lightroom, is the ability for the publish module to find images from Flickr that are in your image library by not published though the publish service. It may not be 100% successful, but I think it could at least make an effort to try and find images based on title, tags, EXIF data, date, etc. and give you the option to have those be added to the publish collection. It might not be 100% successful but at least it would be a start.

New to beta 2 is the much requested point tone curve in addition to the parametric tone curve. For me the point curve is certainly a nice feature, but I find in practice it’s limited in two ways. First, it’s small, dramatically smaller than the one in Camera RAW or Photoshop. On top of that, there’s no way to make it larger. This makes it somewhat difficult to make precise adjustments.

I know the Lightroom and Camera RAW teams like to leap frog each other in features sometimes, the clarity tool comes to mind, this would have been a case where it would have been nice to see Lightroom jump ahead again, at least assuming that the DNG spec provides a way to do per-color curves.

One nice thing, though it’s quite minor, is that Adobe has moved when catalog backups are done. Now you are prompted when leaving the program as opposed to when starting it. To me this is a nice usability tweak, since I frequently want to get into the software quickly but I’m not so concerned with how fast it goes away when I’m done. Therefore, I won’t skip doing a backup simply because I needed to get to something fast.

I’ve encountered shockingly few problems in Lightroom 3 Beta 2 at least with the program itself. Of course, Adobe notes in the release notes, which Beta 2 is very close to the finished product. However, that doesn’t mean I haven’t run into issues, most notably with my Wacom tablet and the latest Windows 7 64-bit drivers. I think this is likely to be more of an issue with the Wacom drivers, and I’m currently working with Wacom to determine the exact cause, since the issues only show up in Lightroom for me (though not just in Lightroom 3 beta 2) I thought I’d mention it here.

The two issues are, on my dual monitor machine a pen confined to a single display behaves oddly when the active application is Lightroom. The second issue is that occasionally the tablet driver will crash necessitating a reboot.

Now I want to reiterate the point again, Lightroom 3 is still beta software, those of us testing it are going to be subject to random, sometimes bizarre, problems. In my opinion, it’s in our best interest to try and report as much of this information to the software companies so they can continue to improve their products. However, as I’ve said repeatedly when talking about Lightroom 3’s betas, this software really shouldn’t be used in production environments. Let the user beware, so to speak.

What I Wish Was There

One feature I really would like to see is something I saw implemented in a plugin called Define 2 from Nik Software. What Define 2 does is let you change the noise reduction levels in a way similar to Lightroom’s adjustment brush works, but differently.

Mostly I find myself wanting something like this because a lot of what I shoot has smooth out of focus backgrounds with a sharp subject. With Lightroom’s overall control, I have to try and balance the noise reduction requirements of the background (where I don’t have any detail I care about) with the need to preserve detail in the subject. This usually means using slightly less NR than I’d like to on the background and masking it to prevent what’s left from being sharpened.

If I could mask out the background and tell Lightroom to use noise reduction settings that are different from the images general noise reduction that would be really handy. 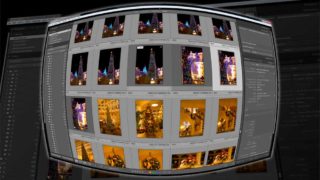 This is becoming more and more important for me, and I think this is important to most serious photographers (professional or amateur). Lightroom currently can remove lateral chromatic aberrations and vignetting but can’t do anything for pincushion or barrel distortion or perspective errors. It would be very nice to not have to litter my drive with a ton of much larger TIFFs that can’t be deleted the way cached copies could be.

Phase One introduced this in version 5 of their capture and RAW processing package, Capture 1. It was so interesting that I had to pull the demo just to check it out, and while I wasn’t completely blown away by it, it sometimes said areas were in focus when they clearly weren’t; it sometimes was handy to use.

Unfortunately, I found Capture 1’s interface so clunky and hard to use that there was no way I was going to move away from Lightroom for something like a focus mask.

As an aside, I’d really like to see this feature in cameras on the rear LCD so you can quickly tell what is in focus and what isn’t.

I’m not entirely impressed with video support yet, though I guess at least being able to store and manage video files the same way as stills is better than nothing.

Tethered capture is also something that I was mildly optimistic over, after seeing it in the feature list. What I’m not thrilled with is the implementation so far. No control over the aperture or shutter speed, well at least I can’t figure out how to make Lightroom control the camera.

For me this is a rather annoying limitation since I can do this though Canon’s EOS Utility and just have Lightroom monitor and import form a folder directly. Additionally, if I have live view enabled on my Canon bodies, I can, through the EOS Utility software, drop into live view mode and adjust the focus without ever leaving my computer.

For me I consider the ability to adjust camera settings and focus (though live-view) to be essential parts of a tethered shooting setup. Therefore, while Lightroom’s tethered shooting is better than doing it the old way, it’s not as good as I think it should be.

I’m still only a week into using Lightroom 3 beta 2, but, so far, I really like what I see. I still wouldn’t recommend people run out and download the beta just because it’s still beta software, but Lightroom 3 promises to be a very nice package when adobe finally releases it.

When will Adobe release Lightroom 3? That I don’t know, but I can say for sure, there will be something out before beta 2 expires in June.

Thanks for this. I’m really enjoying LR 3 Beta 2 for the most part.

BTW, I’ve added you to my ‘Lightroom Links’ page: http://bit.ly/4XuaXE

Did you ever find a solution to the wacom and lightroom issues? I also only have problems in lightroom.

Thanks in advance,
Scott

I simply gave up using the pen in LR3B2 for a while, and when I went back and tried it recently it worked fine. I can’t reproduce it at all any more.

I’m not really sure what the heck is/was going on. I don’t remember updating Wacom drivers (running 6.1.5-3 for Win7) and Lightroom didn’t get updated or reinstalled either.