The AC3 Zone controller is a diminutive in size, but not in functionality, add-on to LPA Design’s Control TL PocketWizards. It’s offered in both Canon and Nikon versions as the contact layout differs for the two styles of PocketWizards. Though both versions are functionally identical, they differ in the layout of contacts for connecting to the associated platforms.

In a nutshell the AC3 Zone Controller allows a Control TL PocketWizard user to change the flash powers for the 3 remote channels without having to leave their camera, and to do so without needing an expensive first party controller in the hotshoe as well.

How necessary this is for a given photographer will likely vary considerably. For a Nikon user, the AC3 replaces the more expensive SU-800, other than a smaller package and slightly faster access to changing powers, the AC3 doesn’t add a whole lot to the equation. On the other hand, for a Canon shooter, the AC3 replaces the ST-E2 or ST-E3 and provides a something previously unavailable non-ratio control of the 3 groups.

In addition to enabling or disabling the zones, the AC3 can change the exposure compensation or flash power for the strobes in each of those zones. This is done though the 3 dials located along the sides and back of the unit. They’re labeled -3 to +3 in 1/3rd stop increments with the negative values indicated as white text on a black background and the positive values as black text on a white background. The chart below shows the relationship between TTL settings and manual powers in whole stops.

One nice feature (at least I know this works with the Canon gear though it may not with Nikon), is that in TTL mode the AC3 combines with the flash and camera exposure compensation values to reach the final flash exposure. That is if you set the camera’s FEC to -3 EV, and the AC3 to +3 EV you’ll get a flash exposure equal to having everything set to 0 EV.

In manual mode, the power can be further reduced by setting the exposure compensation on the flash. That is if you need to go to 1/128th-power, you can set the flash to -1EV and the range of power settings provided by the AC3 will be from 1/2-power to 1/128th-power.

All that said, there are a couple of things I don’t especially like about the AC3. For starters, the flash design means you have to look down at the AC3 to see what the settings are. In other words, you can’t just pull the camera away from your eye and glance up to see if a channel is enabled or its power. If the AC3 was designed, at an angle, this wouldn’t be an issue and the controls would largely be visible from both the top and the back. 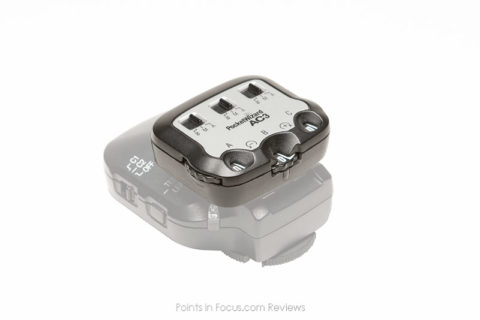 The second issue is that the power dials don’t lock, and aren’t very resistive to being turned. I’ve had a number of instances where I accidentally rotated the dial somehow (I’m still not sure how) and had the flash firing at lower or higher power than I wanted. Though minor, it is annoying to have to reconfigure adjust the settings mid shoot.

All complaints aside, the one thing the AC3 excels at is making it easy to change flash powers while shooting. Having each of the groups controlled completely though dedicated physical controls is very intuitive and efficient. In fact, I’ve yet to find an off camera flash control system that’s as easy and intuitive as a set of ControlTL PocketWizards and the AC3 is.

If you use Control TL PocketWizards for your off camera flash work, I would argue this is a must have accessory.