Canon offers two teleconverters that are compatible with their EOS series cameras, the Extender EF 1.4x II (discussed here) and the Extender EF 2x II. They have both undergone an optical redesign since their initial release, hence the II in the name.

A tele-extender or teleconverter is a supplementary lens that is placed behind the main lens and acts as a magnifying glass, narrowing the captured angle of view and enlarging the subject. This is commonly described as increasing the lens’s focal length.

In addition to increasing the lens’s focal length, the converter also magnifies any aberrations that the lens may produce. This becomes more noticeable as the extender’s power is increased. The effects when using a 1.4x extender are often unnoticeable; however, a 2x extender can noticeably degrade even the sharpest lenses.

In addition to the optical affects, and the loss of a stop of effective aperture, the increase in effective focal length demands the use of good long lens technique to insure optimal results. 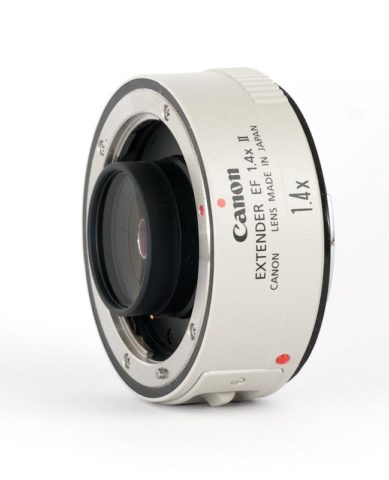 The EF 1.4x II is a solidly built lens with an all metal body and metal lens mounts. In addition, it is fully weather sealed with a rubber gasket on the rear mount and the corresponding mating surface on the front mount.

The EF 1.4x II has a protruding front element, as seen in the photo above, this limits the number of lenses the EF 1.4x II is compatible with.

In general, the EF 1.4x II is compatible with most L and DO lenses that are 135mm or longer. This includes all four 70-200mm zooms. Lenses specifically not supported include the EF 135mm f/2.8 Softfocus and 70-300 f/4-5.6 DO. The Extender EF 1.4x II is not compatible with any EF-S lenses, or most lenses from 3rd party manufacturers.

Canon’s cameras are designed to disable the auto focus system when the optical characteristics of the lens or lens and extender combination used with the camera exceed the sensor’s ability to properly focus.

For most Canon cameras, except those in the EOS-1 series, this means if the effective aperture exceeds f/5.6 auto focus will be disabled. Practically this means that for non EOS-1 bodies, the slowest lens that can be paired with the EF 1.4x II has a maximum aperture of f/4 or faster.

Canon EOS 1 series bodies will retain autofocus with the central point with lenses with an effective aperture of f/8. When using an EF 1.4x II, auto focus is operable with lenses that are f/5.6 or faster.

It is possible to work around the aperture requirements though one of two mechanisms. There is the widely noted “tape trick” that involves taping over some contacts preventing the teleconverter from reporting itself to the lens and camera. In the name of science, I have tried this and frankly I found it to be totally useless. While it may work better with some lenses, it’s not something I would want to depend on working in a critical situation.

The second work around is for cameras that offer contrast detect AF in live view mode. These include the EOS 5D Mark 2, EOS 50D, and Rebel XSi, Rebel T1i. Contrast-detection auto focus isn’t subject to the minimum aperture requirements that phase-detection is, and therefor isn’t disabled and remains functional.

The EF 1.4x II can be stacked with Canon’s EF 2x II extender as long as the 1.4x II is placed closest to the camera. In this configuration, the lens’s aperture will be reduced by 3 stops and its effective focal length increased 2.8 times. However, the Canon extenders weren’t designed with this operation in mind so only the front teleconverter reports its presence to the camera.

The performance of the Canon Extender EF 1.4x II is quite good, even when paired with lenses on the lower end of its supported range like the EF 100-400 f/4.5-5.6L IS USM and a high density sensor like that in the EOS 40D. When paired with the very high-end super-telephoto lenses like the EF 500 f/4L IS USM the difference in image quality is virtually unnoticeable.

As good as the Extender EF 1.4x II is the resulting image quality won’t match that of a longer lens. That said it’s not always desirable to have or carry a 600mm or 800mm lens or even a 400mm lens and this is where the EF 1.4x II comes into play. When packing light, and where long focal lengths aren’t going to be used the majority of the time, a 70-200 or 300 f/4 paired with the EF 1.4x II is quite capable of pulling of quite acceptable shots.

After some practice mounting and un-mounting the EF 1.4x II becomes very easy. The recommended procedure is to mount the convert to the lens then the converter-lens combination to the camera. This works especially well when the lens is mounted on a tripod and less so when everything is hand held.

There is one other consideration, due to the protruding front element the front cap for the EF 1.4x II is taller than a camera body cap, even though they are otherwise the same. This can be problematic if you drop all your caps into a single pocket in your pants or bag. If you do this, you might want to consider replacing your camera body caps with the same cap as the extender. This is part “Extender Cap E II” and they run about $7 a piece.

Like most photographic items, extenders fall in the “you get what you pay for” category. While the EF 1.4x II is a bit pricey, listing at about $310 at the time of this writing, the image quality over its cheaper competitors is very much worth it in my opinion.

As to whether you should get a teleconverter in the first place, that’s a more personal question. For $310 and 8 oz. you can add 50% more lens to your bag. For me, the increased flexibility is worth it for those times when I need the image more than I need a great image.