When choosing a Sibley guide, it’s important to understand the organization of the three books with respect to each other. The Eastern and Western guides focus on birds found either east or west of the Rocky Mountains, and omit the species not found in the region they cover, some subspecies and illustrations of some of the less frequently seen plumage variations. This helps to reduce the weight of the Eastern and Western guides quite dramatically, from 2.5 pounds to 1.5 pounds, making them much easier to carry in the field. The Sibley Guide to Birds contains the width and breath of the two smaller guides, and is the book reviewed here.

The first thing that struck me about the Sibley Guide to Birds is that it’s not small or compact by any stretch of the imaginations. The book weighs in the neighborhood of 2.5 pounds, and doesn’t exactly fit in a small bag. It of course can be easily carried in a backpack but it certainly doesn’t fit in the available space in the camera bag (a Domke F2) I normally carry with me. This is definitely the book to keep at home and either take one of the smaller Sibley field guides, or keep in your car–though I have no idea how it would be of any use there. The other alternative, at least if you’re a photographer, is not to carry a field guide and make your identifications from your pictures; though one has to be careful when doing that as much of the behavioral context is lost when working strictly from still images and that is an important spotting characteristic with a lot of species. 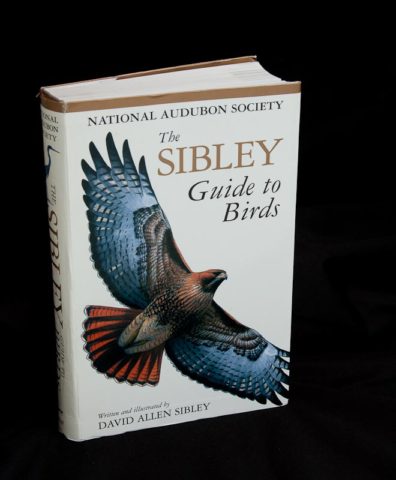 The build quality of the book I’d rate as average, it’s certainly not great, but it doesn’t appear as though it’s going to fall apart any time soon either. The binding seems solid and the pages are nicely weighted and are coated with a luster coating. My copy opens fully and easily and lays flat when set down. The pages also tend to lay flat and not turn on their own. I find the text is crisp and very legible and printed with a serif font so it’s easy to read.

Like most field guides, the imagery provided is in the form of illustrations, there is no photography in the book at all, other than Mr. Sibley’s portrait on the inside back cover. Each illustrations are on the order of 1 inch by 2 inches, and there are several per species. They appear cleanly printed, at least well enough to make an identification by. The only complaint I do have is their size, I would love to have seen larger illustrations, but I can understand and appreciate the need to keep them small in order to keep the book’s size manageable.

The first few pages consist of a brief introduction to birding including some field observation techniques, an introduction to filed marks, an overview of the way a bird’s plumage wears and some notes about natural variation and diagrams with nomenclature for referring to the feathers and anatomy of birds. 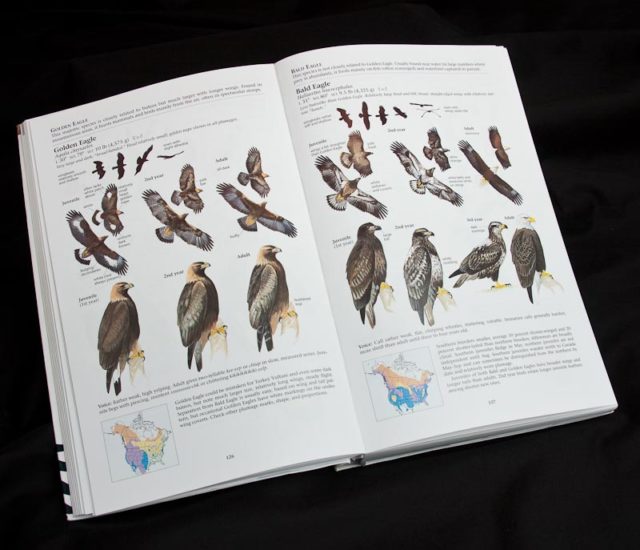 The introduction quickly gives way to the meat of the book, 514 pages of field marks and notes for each of the 810 species covered. The species are broken down into 45 groups related by shape and family. Each group stars with an overview and comparison illustration of the species covered in that section along with a brief description of general spotting characteristics. The introductory page is followed by the individual species pages. I have yet to discern how the species are organized in a given section or even how the sections are organized as a whole. Additionally there are expanded guides to identifying particularly difficult species placed in the relevant sections.

Each page is headed by a brief notes on the species describe don the page, or spotting differences if they are similar or often confused. This is followed by the common and scientific names, as well as a basic measurements and a short description. The majority of the page is devoted to illustrations of the species, including flying and standing/perching positions as well as variations in plumage. Each species’ description is rounded out with a description of its voice and a map showing its distribution in North America.