Some people would argue that in the brave world of digital, filters are obsolete nonsense that should be left in the garbage along with film. Though it’s true that some filters certainly can be dumped, there are many that are still useful, most notably among these are neutral- and graduated-neutral density filters, and to do that right, you need some kind of filter holder.

Why use rectangular filters instead of screw in ones? 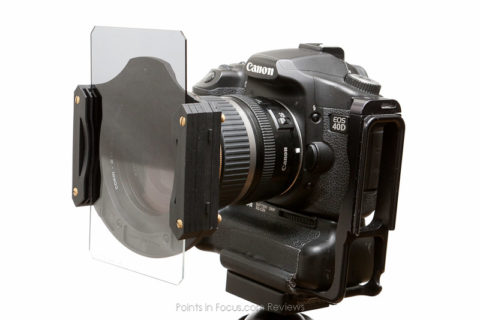 To me there’s no question as to whether you should use rectangular filters or not; the only question is what size do you need?

Rectangular filters come in a verity of sizes, Cokin brands these as A, P, Z and X, in order from smallest to largest.

The A series filters are largely aimed at compact and point and shoot cameras. They will work acceptably with small lenses that aren’t especially wide angle on something like the 4/3rds platform or most P&S that can take filters.

The P series are by far the most commonly used for SLR class cameras. Though popular, the P series filters, have limitations on how wide the lens can be before they start causing problems. For example, I find that anything wider than about 24mm (15mm on a crop camera) will see significant vignetting from the filter holder in the images.

Slotting in between the P series and X-Pro series is what Cokin calls Z-Pro. The filters are 4” wide, which is actually a more standard photographic and cinematographic size than the more widely known P filters.

4 inch filters can be had from a number of companies (Cokin, Hitech/Formatt, Lee, and Signh-Ray to name a few). For the most part the filters are interchangeable between 4” systems, the only real exceptions are for polarizers. This was no small part to my decision to go to the slightly more expensive 4” Z-Pro system.

The other benefit of the larger 4 in. Z-Pro filters is that they vignette less on ultra-wide angle lenses. This was actually the primary motivation for not going with a cheaper P sized system. When using my Canon EF-S 10-22mm f/3.5-4.5 USM, P sized filters had to be held in front of the lens at most focal lengths simply to avoid vignetting from the filter holder. With the Z-Pro system, the problem is reduced dramatically, though not completely eliminated.

Cokin’s Z-Pro filter holder is an amazing simply concept. It’s made from a combination of 3 different basic pieces held together by brass screws to form a very flexible solution. Show below is a completely disassembled Z-Pro Holder.

In the normal configuration, there are 3 filter slots on the front, 2 for normal thickness filters, and one for Cokin’s thicker circular polarizer. The springy plastic bits that hold the filter in place provide enough pressure that the wider first slot doesn’t have to have the spacer removed for normal filters either.

The back side, is a single slot. In “normal” use the single slot on the back is fitted over the adapter ring that you screw into your lens’s filter threads.

Moreover, a little creativity can get you 2 filter slots for an wide-angle lens. Simply put the adapter ring in the rear most slot of the 3-slot side, and screw the whole assembly onto your lens.

In contrast, many of the other 4” filter holders, have less flexibility in the way the holder can be mounted, and as a result have to be taken apart to adapt to ultra-wide lenses where vignetting from the holder is a problem.

However, in the end, this flexibility ultimately ended up being the biggest problem I have with the holder.

When using high-power ND filters, like a 10 stop (ND3), it’s critically important to have a good light seal between the ND filter and the lens. In short, this means the filter has to be in the rear most position and this is where the problem comes.

The Z-Pro holder center’s itself on the lens by way of 3 plastic pins; 2 in the bottom and 1 in the top. The arrangement of the pins means that to completely cover the lens ring, the core part of the filter holder has to be used backwards, not that this poses a significant problem in and of itself. However, the required arrangement to get that seal also means you can’t do the whole reverse the holder on a wider lens and still use the filters.

It seems clear to me, that Cokin was hoping to make the holder work in a way that was quickly reversible without having to completely disassemble it, the arrangement causes some issues. Moreover, I think a few mm of thickness could have been shaved off with a single-single direction core piece that required disassemble to shorten.

The second complaint is that if the plastic “springy” tabs are kept compressed for any length of time, they deform. In fact, the pair of “springy tabs” that are on the mount side of my holder has become less “stiff” simply because I kept a filter ring in them for a couple of days. Now consider, that while that may sound like a bad idea, the slots are 2.75mm thick, the adapter ring is 2mm thick, as are most filters.

Even now in the digital age, some filters are still useful tools and the rectangular filters and their requisite holders are still the most flexible way to deal with neutral density filters.

To me the only real question is what size holder you should get. Though it would be easy to simply jump on the more inexpensive “Cokin P” sized filters, the 4” (i.e. Cokin Z-Pro) filters are considerably more flexible and are produced by a number of companies.

As for Cokin’s Z-Pro holder? It works, and there’s not much else that needs to be said. It may not be as easily flexible as it seems like it should be, but at least it’s not any worse than anyone else’s is.

One of the things that always bothers me about writing reviews is that frequently in my rush to write about the resulting product I don’t spend nearly enough time using it to really get a handle on the warts and problems. Likewise, it’s also becoming increasingly clear to me that one really needs to have a lot more context in terms of competing systems to really see how the warts play out.

This review is no exception. I had thought when I wrote it originally that I had a pretty good handle on the problems with the Cokin system. In fact, I mentioned at least some of them in passing when I originally wrote the review. But didn’t make much of a deal about them as they seemed like minor inconveniences and it wasn’t readily obvious to me how anything else was better.

So, now more than a year later with a lot more time with the Cokin Z-Pro holder, I’ve really found the shortcomings of the system to be rather annoying.

Let me start with high-power ND filters. The required light seal is quite important, stray light leaking in through the rear of the filter will easily affect the quality of the resulting images. When I wrote this review originally, I hadn’t really seen any problems with light leaks with high powered ND filters. Of course if you shoot enough of something, you start recognizing the flaws, and there were definitely cases where light was leaking in around the filter or holder in those long exposure images.

Cokin’s system falls down in this respect in 2 ways. First, the front surface isn’t quite smooth and the filter doesn’t form a perfect seal over the opening in the core piece. I attempted to fix this on my holder by gluing a piece of micro fiber cloth over the entire front surface of core piece. This worked well enough; it certainly worked better than not having it there.

The second major problem has to do with the stacked design and ultra-wide angle lenses. The Cokin system ends up placing the filter in front of a 5mm thick core, that sits in front of a 2mm thick ring, that then screws into the filter threads on the lens. As a result, when you use a real wide lens, vignetting becomes a problem or you have to remove a lot of your filter slots.

Finally, though not a major problem, to a lesser extent the Cokin holder’s attachment system did become somewhat annoying to me. Having to slide the filter on, and lock it in place by pushing one, or more, of the pins into place isn’t world ending, but again, after looking into the Lee system’s “quick release” style mechanic, it’s clearly a dated and inferior method.

Over time, those issues grated on me enough that I started looking into Lee’s holders. Truthfully, I wanted to go Lee in the first place, but after 6 months of trying, I couldn’t get my hands on their holders, which is why I ended up with the Z-Pro system. Unlike the Cokin system, the Lee system doesn’t stack filter on holder on ring. The ring sits flush with the front of the holder in such a way that not only does it form a very good light seal around the back of the holder, but it also places the first filter slot much closer to the front of the lens treads than Cokin’s system can.

In the end, I still stand by my conclusion that the Cokin Z-Pro holder holds filters and there’s not much else to say about it. If that sounds like a less than enthusiastic; that’s because it is. While the holder works in the sense that it holds filters in front of the lens, I call it the best solution available. Personally, I’ve replaced my Cokin Z-Pro with a Lee holder, and find that overall Lee’s design solves most of the rough edges that ultimately frustrated with me the Cokin Z-Pro holder.