I posted a video a while back talking about the Zoom F6 attenuated like out noise problem. So to briefly recap that, the F6 has a built in attenuator that can adjust the line level output from the default of -10 dBv (-7.78 dBu) to above the professional +4 dBu (+1.78 dBv) level all the way down to mic level around -48 to -50 dBV. However, there’s a EMI coupling issue internal to the F6 that significantly raises the noise floor when the the built in attenuation is used to drop the signal by 48 dB.

To get the cleanest signal (and the most dynamic range) out of the F6 and into your camera’s audio in, you need to limit how much attenuation you apply using the F6’s built in attenuator, and run at, or close to, line level.

For some cameras, such as some of those from Panasonic, and most professional level video cameras. You then switch the camera’s input from mic level to line level and everything works pretty much as normal.

However, most VDSLRs and mirrorless cameras don’t directly support line level input on their audio ports. For these cameras, you need to use either a combination of gain and attenuation or a -50 db pad cable to drop the signal from the F6 to mic level.

When working with my Canon EOS 5D mark IVs, I found that I could use a combination of setting the F6’s output gain to around -20 to -21 dB, and setting the camera’s mic input gain to 1. This gave me a -6 dB signal on the camera’s level meter and kept the noise floor at or below the camera’s -40 dB levels.

While this process isn’t prefect, it does provide adequate performance for a scratch audio track and syncing with the F6’s internally recorded track using the audio waveform.

However, when adapting this procedure to the new EOS R5, I found the behavior to be markedly different.

What I noticed right away was that with the input gain on the R5 turned all the way down, the signal is limited (even if the camera’s limiter is turned off). Specifically, I could turn up the gain on F6’s line out, and the signal on the R5 wouldn’t increase with it. 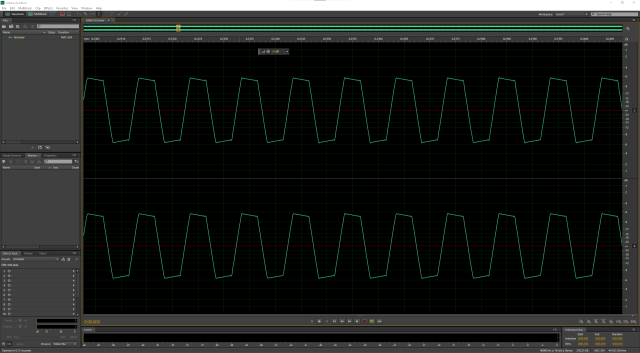 As you can see in this screen grab from Adobe Audition, the peaks of the sine wave are clipped. However, I don’t think they’ve been clipped digitally, as the tops aren’t horizontal (e.g. digitally clipped signals), but slight decays.

As an aside, in the process of investigating this, I ran into another change in the R5’s audio system too. The R5 produces big-endian byte ordered PCM audio data, not little endian ones. By and large, this shouldn’t be an issue for most modern audio software, but it did cause Adobe Audition CS6 to choke.

Given that little-endian byte ordering is by far the most common option, I can only presume that the reason the R5 produces big-endian data is that the DiGiC processor or some other hardware in the camera runs in big endian mode, and that reversing the byte order while saving the audio wasn’t as efficient.

If you need signed 16-bit little-endian format audio data, you can lossless convert them using ffmpeg (and probably other software), using the following command:

To start with, I want to mention that this isn’t a problem if you’re using a microphone operating at microphone levels. Under those conditions, you’ll have to increase the recording level high enough that the camera shouldn’t clip any signals.

I didn’t see any clipping problems once I got the rec level adjust up about to the 1/3 mark or so.

In fact, just activating the attenuator on the R5’s input while keeping my F6’s output set to -20.5 dB, seems to be sufficient to eliminate the clipping issue.

Alternatively, you can always use a proper 50 dB line level to microphone level attenuator cable and run the F6 at full line level.

So in summary. Canon changed the audio processing in the R5, at least compared to their older cameras that I have access to (the 5D mark IV, and EOS M3). Namely, there appears to be some level of analog limiting in the input being applied to very hot signals.

Additionally, the PCM audio streams are now written in big-endian byte order. This shouldn’t make any difference to most modern NLEs, DAWs, and media players, but it might in some edge cases (such as with old versions like Audition CS6). Additionally this may also explain why the R5 cannot play video files recorded on the 5D4, as the audio streams are in the wrong byte order, while lossy audio files in aac format (such as from the EOS M3) play back fine.

As an aside, I’m also interested if this is a Digic X thing or something more specific to the R5. If someone reading this has a EOS-1DX mark III and would be willing to check or send me a short sample video file I can check with (can be just a couple of second of blank video, but it has to be the original file from the camera not something uploaded to YouTube or any other service), I’d love to know if that camera is doing the same thing with the byte ordering.