Good decorators don’t just throw things up haphazardly, there’s always a story to be found in the way the decorations are arranged or in the decorations themselves. Find it, and find a way to capture and convey it.

Moreover, there’s always a story to be found with the way people interact with the decorations. Family, the public in general, anybody admiring the display can strengthen the photograph of the display by adding an element of interest, whimsy, or simply curiosity to the image being presented. 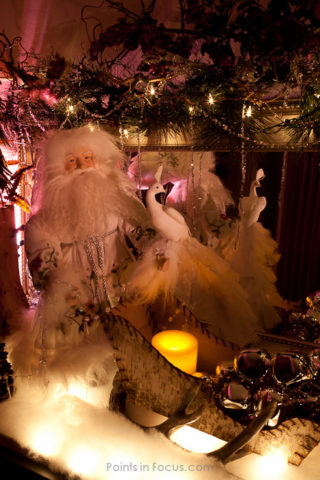 Never once in my life have I managed to make a decent image of a whole, decorated, Christmas tree on its own. No matter how nicely decorated or lit it is, there’s simply too much going on to take in the whole tree for it to make a strong image on its own.

Instead, try to find a shot that contains the tree as an element but adds more than just the tree as a point of interest. Give an overall sense of the display and then focus in on the details.

Christmas lights don’t produce a lot of light, and that means you’ll be looking at longish exposures even at moderately high ISOs. Especially if you’re stopping down to get more of the scene in focus.

My preference is a tripod, but that’s not always practical. A stabilized lens in the wide to normal range (like an 18-55mm lens on a crop camera or a 24-100 on a full frame camera) can often be hand held at shutter speeds as low as 1/15th or even slower. Add a “string tripod” to the mix and you may be able to go even slower.

The color of white incandescent Christmas lights is incredibly warm. I make them out to be around 2400K. If you’re aiming for white lights being white in your images, you’ll need a custom color balance to do that, auto simply won’t go low enough.

That said, I’d suggest keeping the lights a tad on the warm side so they appear more natural.

When adding flash into the mix, ungelled flash will appear snow white compared to white Christmas lights. For most scenes, however, balance for the room’s lighting not the Christmas lights. If you’re shooting just decorations alone and want white lights, you’ll need at least a full CTO if not a full and a ¼ CTO gel on your flash.

There’s one final consideration, and that’s the lights themselves. Incandescent lights are increasingly being replaced by LEDs. When it comes to LEDs you can throw everything I just said about color out the window. White LEDs can be everything from bluish to very amber.

On final thought on LEDs, most will flicker 60 times per second, just like computer monitors or florescent lamps. If you’re dealing with LED lights, this limits your fastest shutter speed to at most 1/60th.

If you’re not sure if the lights flicker or not, you can set your camera to a 1/15th or so and pan the camera quickly while taking a picture. The LEDs that flicker will appear as broken lines while non-flickering lights will appear as solid lines.

If you’re shooting decorations with off camera flash, consider ways to mold the flash’s light into something other than just strobe light.

One thing to try is using a grid or snoot to narrow the flash’s beam to highlight specific parts of the scene. This can be used with great effect to help pull a story out of a bunch of decorations by spotlighting a single element in the more diverse scene.

A second alternative is to consider creatively gelling the flashes to more festive colors. Red, green and blue are always good choices. Painting the background red, green, or even both colors can add an interesting festive background to an otherwise boring scene. You can also try the old Storibist trick of shooting through branches or glasses, to break up the uniformity of the light on the background.

With a little patience and an eye towards finding details, just about any holiday display can turn into an interesting photographic subject.