Reflex lenses, or more properly catadioptric lenses, have long posed photographers with the possibility of a long telephoto lens at a fraction of the cost of the standard refractive lenses. A 500mm f/8 reflex lens for $200 or less compared to the $10,000 for a 500mm f/4 refractive lens. They’re simpler, manual focus, no iris, far fewer glass elements, and that makes them cheaper, but they aren’t all roses either.

Arguably, the biggest downside to reflex lenses is the way their out of focus highlights are rendered. Instead of smooth blurs, they become doughnuts. Why does that happen? Why doesn’t the secondary mirror not simply obstruct the central portion of the field of view?

There are a couple of ways to describe this, but I find that ray tracing is most clear to me for the highest-level conceptual understanding. So that’s what I’m going to go with here.

In order to simplify and clarify the drawing, I’ve substituted an idealized thin lens for the more complex catadioptric system. The systems work the same, so far as this discussion is concerned and it’s much easier to draw and understand without becoming confusing.

The first thing to realize is that non-collimated light sources, pretty much everything that isn’t a laser, radiate light over all the angles that it can be seen from. Or, perhaps more relevant to our concern, is that a lens doesn’t form an image of a source because the light hits the lens in a specific spot on its surface, but because the entire surface sees that light and bends it towards a single point of focus. (Of course, the physics of that is extremely interesting in and of its self, but that’s a story for another time.)

Let’s start with the case where the image is in focus. In the image below, you can see the two in focus cases. The top case shows the standard idealized lens with nothing obstructing the aperture. The bottom, the idealized lens has had a central obstruction added to mimic obstruction created by the secondary mirror in a reflex lens. The rays, while indicative of various light paths, are not the only paths that light will take though the lens. 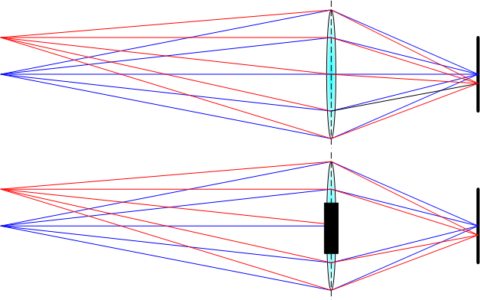 When the lens is focused, all the rays that leave a given point, trace to the same focus. In the case of the centrally obstructed lens, the central obstruction simply blocks those rays from reaching the image plane. The result is that the light that forms the image is reduced—much as it would be if the lens were stopped down by a similar reduction in area—but otherwise the image is still formed regardless of whether it’s centered (blue) or off centered (red).

So what about the out of focus case? 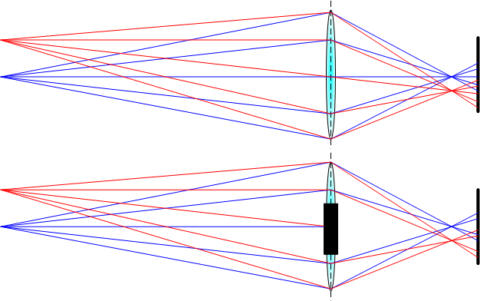 In the image above the rays are focused in front of the film plane. Since there’s nothing to stop the rays from passing though where they’ve been focused, they continue until they reach the sensor, spreading out again. The key difference this time is that since they’re spreading out instead of being collected, they speared out to missing the central rays that were blocked, and the center says dark. Thus the doughnut shaped bokeh is created.

It doesn’t just stop there. In the above case, I’ve been assuming that the obstruction was radially symmetrical, i.e. round. If the obstruction were square, the central dark spot would be squareish instead of round. In fact, the same principal applies to the creative bokeh techniques where you place a shaped aperture in front of the lens. The aperture blocks light the same way as the catadioptric lens’s secondary mirror does, only instead of it being undesirable it’s being done deliberately.