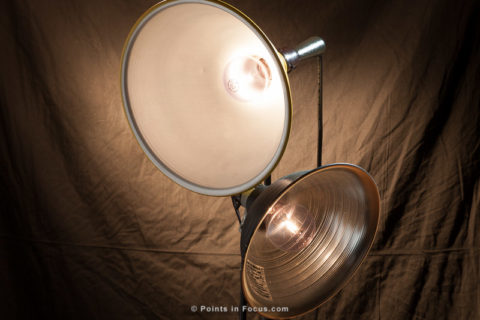 I originally wanted to call this zero-budget lighting, but then I realized it’s silly to work on that premise. There is one useful zero-budget light source, the sun, for everything else you need to spend some money or scrounge something that cost someone else money. That’s not to say you can’t go some way on a small budget, but there needs to be a budget none the less. Simply put, I think if you have any aspiration of producing something with a decent production value, you have to spend at least a few dollars on lights, and that’s what I want to talk about here.

At the very bottom of the barrel, are the home-improvement-store clamp-on “pan” work-lights. They are cheap—mine cost me all of $5 apiece—produce light, and in a way that’s all that really matters. However, like most things, you get what you pay for; compared to higher tier lights, they have poor reflectors, no handles, short cords, and typically low power ratings. Some of those shortcomings can be worked around, sometimes easily, others not so much.

For example, fixing the short cord. The sockets in most if not all of these kinds of lights, can be disassembled simply by unscrewing, and the cord replaced with a suitable lamp cord and plug assembly of whatever length is needed. Or, you can just plug them in to an extension cord and be done with it.

Or consider the reflectors. They simply aren’t designed to produce an even beam. However, you can always whack a bit of heat resistant diffusion over the fixture, or remember always to use a frosted lamp instead of a clear one.

Even the lack of a handle can be worked around.

That said, the real problem in my opinion, is the inability to handle high power lamps safely. A 100W or 150W lamp may be perfectly passable for a tabletop still setup but my experience is that you need at least two times more than that for a key light for a video production. The simple reality is you need light, and lots of it, or you have to settle for highs ISOs and very shallow depth of field.

All that said, for $5 apiece, the hardware store pan lights are a decent, but not perfect, solution. I used them for a quite a while for still photography when I was first getting started, and they came back out when I first started playing with video. They’re certainly good to have, but they’re best used as background or accent lights.

Taking a step further up the lighting pyramid, you have something like Smith-Victor’s Adapt Lights—or in my case Smith Victor’s Adapta Lights. In a way, they’re just overgrown hardware store lights, with a slightly bigger price tag—sort of. What your $35-45 buys you is a reflector designed to even out the beam and attach accessories, and a lamp holder rated and tested to accept 250W or 500W incandescent lamps.

The first part of the story is power. The Adapta-Lights are tested and UL listed to handle 250W lamps, with some listed for 500W lamps. Better yet, they stay manageable at those powers thanks to a handle for reaming them that stay’s cool.

The second factor is quality of light. Simply put the reflectors in the Adapta Lights are much better at evening out the beam from even a clear lamp than the hardware store lights are. Though there is still a hot spot to some degree, the falloff is much smoother and better controlled.

Then there’s the line of accessories designed to mound directly to the reflector, from scrims to diffusers, to barn doors. All of which are fairly reasonably priced.

To me the real question comes down to production value. The hardware store work lights are cheap, and that’s a quantity that’s hard to beat. On the other hand, the Adapta Lights being designed for photo and video work are ever so slightly better and actually having the little touches that make things that much easier.

As far as lights go, either the hardware-store pan lights or the Adapta Lights are essentially 0 budget items. The difference really comes down to how much you can get out of them in terms of production value. Being able to safely handled 2 to 4 times more power means I’m not forced to shoot up in the ISO 3200 range but can drop down to 1600 or 800, which makes a difference. Moreover, the smoother beam means that if I have to shoot with lamps from the hardware store, I don’t have to care whether I can get frosted lamps at high wattages.

The Next Step Up

The next step up is to invest a couple of bucks into a real video/cinema light. On the low end, there are tons of choices.

Moreover, all these halogen lamps turn out to be ever so slightly cheaper on the consumable side, as their lamps are generally rated for 100-200 hours of operation, compared to the 20-60 hours you can expect from the photo incandescent lamps.

Unfortunately, I haven’t made this jump yet, so I don’t have much to say about any of these specifically.

The real downside to budget lighting is heat. The simple reality is that video takes a lot of light, and incandescent lamps radiate most of their power as heat, technically infrared light, not visible light. Regardless of how well designed the lamp housing is at keeping itself cool, the subject is still in front of a good deal of IR producing lights, and will get hot.

To make matters worse, florescent lamps aren’t readily available at powers much higher than 150 equivalent watts. To get decent power levels, manufacturers pair multiple lamps in a single fixture. Likewise, I’ve yet to find a photographic LED source that can be screwed into an Edison base lamp fixture.

In the end, I think the best budget lighting kit draws a little from the various available sources—for example, lots of cheap hardware store fixtures for the background lights and a good fixture for the key light—especially given the number of fixtures you’ll probably find you need to light anything decently.