A couple of weeks ago, when I was talking about the D500 again, I started to develop the idea that we photographers should be demanding more from the companies the make our cameras. At that time I was just thinking about quality standards. That got me thinking. Better quality is great, but you still need to understand how the camera behaves to use it optimally.

When digital sensors replaced film, the cameras became more than just a vessel to hold the image forming material. They literally became the film too. Yet when this transition happened, we lost information that we previously had at our disposal too.

If you’ve never shot film, or at least seriously investigated it, you’ve probably never seen the graphs below. 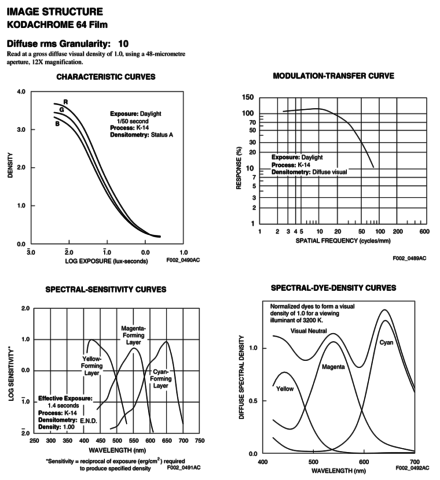 These graphs are the characteristic curves for a piece of film, in this case Kodak’s now discontinued Kodachrome 64. More importantly they tell you almost everything you could want to know about the film and it’s capabilities.

Take the top left curve, the one labeled Characteristic Curve. The film’s dynamic range, among other things, can be derived from these curves.From reading this, I can see that Kodachrome 64 around 9 to 10 stops of dynamic range.

The other 3 charts describe the film’s resolving power, and the frequency response and relative density of the film’s dyes.

Along with these charts, the film makers published all the relevant information for color correction, dealing with reciprocity failures, and developing the film.

Moreover, every major film manufacturer published this information for every one of their films. It was a standard thing that was necessary to be able to properly understand the behavior of the film in any meaningful way.

With digital this kind of information has gone out the window. Camera makers simply don’t provide any kind of technical data reflecting the response or behavior of their sensors. We’re left to determine this on our own — which admittedly is much easier with digital than it was with film.

In any event, instead of getting all the technical information in the box, we’re left to depend on sites like DXOMark, SLR Gear, and others. Even then, there are points that I’ve though would be nice to have data on that aren’t covered by anybody — including me.

In fact, as I continue to dig deeper into my understanding of digital photography I continue to find places where I’ve never seen published information that would be very useful to have available.

I suspect that most of us that have dug into the technical stuff understand that noise and dynamic range are related. As the noise levels increase, the dynamic range of the image decreases. If you look at any of DXOMark’s dynamic range charts, you see this quite clearly.

However, noise also masks detail, which means it’s also lowers the ability to discern detail, it lowers the effective resolution.

I knew this, at least in theory, but I didn’t really understand the effect until recently when I sat down and re-evaluated my camera acclimation and Lightroom default setup procedures. With actual resolution bars in my test target, I could very clearly see the loss of effective resolution that was incurred by shooting at noisier ISOs. I knew this happened, but I never had an exact understanding of the impact until now.

More importantly though, nobody publishing lens or camera test data publishes the effective resolving power for digital cameras as a function of ISO. It’s one thing to know that your 5D mark III has 22.3 million active sensor sites, and that they have a pitch of 6.25 μm, but can you actually use all of that effectively in any given image.

We can look at the ISO 12233 charts published by a site like the Digital Picture, and see the resolving power of a lens on the camera, but those images are made at ISO 100 when the sensor has the lowest noise levels and therefore the getting the most useable resolution. However, while the lens’s capabilities remain unchanged when I crank the camera up to ISO 6400, the camera’s abilities to not lose those fine details in noise doesn’t.

Actually, just this thought prompted me to redesign my camera acclimation target yet again, so that the central resolution marks are properly scaled and I can use them to actually measure effective resolving power verses ISO. That in turn prompted me to dive down a whole long road on building resolution targets, but that’s a subject for a future article.

I would love to see a camera maker step up and include the following information in their manuals.

While I wouldn’t consider this a replacement for sites like DXOMark. After all independent confirmation is good to have, if not necessary. I shouldn’t be completely reliant on those sites to get this kind of basic information either.

I think, as photographers, we should have the most information available to be able to make as informed of a decision as we can when using our cameras. To me, part of that means having information about the actual performance of our cameras and not just some marketing thing saying, “oh look isn’t this image impressive.”