When Nikon announced the D5 and D500 one of my biggest concerns was that marketing had run amuck and started writing ISO checks the engineers simply couldn’t pay out on. Then a friend of mine got a D500 and I got to sit down with him to dial in the noise reduction and sharpening settings in Lightroom to get as much out of the camera as he could. Part of that process — which I’ll be detailing in an upcoming article — is to generate a set of test images at all the ISOs on the camera.

The results, in my opinion at least, are every bit of what I was afraid of; marketing driven inflation.

Let me be clear about one thing though, it’s not all doom and gloom. Noise performance below ISO 102,400 is very good for a DX camera. I would even dare to go so far as to say it’s some of the best DX images I’ve seen to date

It’s also worth pointing out that this isn’t exactly apples to apples either, nor is it supposed to be. I’m not trying to persuade you to switch brands or formats here. I’m not, and neither is my Nikon shooting friend with the D500. My interest here is firstly, just to get a feel for the camera in a context relative to what I’m use to, and secondly to talk about the high expanded ISO performance.

At ISOs below say 6400, I find the D500 is a quite compelling camera. From 6400 to 102,400 (H1), it hangs with my 5D mark III more or less; though at this level I really felt that we’re talking about images that are more important to have than to have be good, but it’s certainly acceptable quality.

Well, let me put it this way, I’m surprised that Nikon would want their name associated with the image quality that comes out of ISO 1.6M on the D500.

Again, to be completely fair there’s no noise reduction at all in these two images either.

Now I fully recognize that we were processing these images in Lightroom, and Lightroom doesn’t get the special sauce that Nikon’s own software (be it in the in camera NR or Capture NX on the desktop) get, heck Lightroom doesn’t have the most fantastic NR capabilities of even any of the 3rd party raw processors. So it’s entirely possible that with more fine tuned NR software slightly better results could be achieved.

That said, even though I’m fond of pointing out that most high ISO settings are there for when it’s more important to have a picture than to have a good picture. What I’m seeing in the test images we made is barely discernible as a picture at all.

In fact, high ISO image quality was one of the big areas that concerned me with both the D5 and D500.

Internet camera fanboys, especially the Nikon and Sony ones, love to talk about how amazingly high the dynamic range on their preferred brand of camera is. What they conveniently leave out of the discussion, either because it undermines their superiority or because they don’t understand the details as well as they like to think they do, is that their big 13–14 stop dynamic range number that DXOMark publishes, is the peak dynamic range, not what you get at every ISO.

In other words, as the ISO goes up, the dynamic range and effective resolution — the image quality — go down.

Most camera makers cut off their ISO range when the dynamic range gets down to about 5 stops. Maybe a little higher, maybe a little lower. Five stops isn’t great, but again, we’re talking about settings where having a picture is more important than having a good quality picture.

Why stop around 5 stops? It may just be entirely coincidental, but that’s also about the range you get from typical inks on typical newsprint.

According to DXOMark, with the D5, Nikon has allowed the highest ISO setting’s dynamic range to fall all the way down to 1.39 stops, and the mid tone SNR to drop to 3.3db. Judging from what I see with the D500, it appears they’ve allowed for the same extremely poor image quality there too — only due to the smaller sensor the ISO values are limited a stop lower.

When I was talking about this with my friend when we were looking at these images, he mentioned that in his mind, when he sees these huge ISO numbers it implies to him that the low ISOs must therefore be that much better.

I might have been inclined to agree, in theory at least, if I wasn’t looking at the utterly dreadful ISO 1.6M image we just shot.

And it’s not like the thinking wouldn’t be true, if the manufacturer drew a proverbial line in the sand and said, “this far, and no further,” and fixed the image quality at some minimum level. Unfortunately that doesn’t seem to be the case anymore, at least not for Nikon and not for the D5; and judging by what I’m seeing with the D500 not it either.

Image quality (read noise performance, and as a result dynamic range, color fidelity, effective resolution, and all the host of other factors that depend on the signal to noise ratio), changes with ISO in a relatively linear manner, at least that’s the case for most cameras. Broadly speaking, increase the ISO, and you increase the noise and thus decrease the image quality.

Given that set of assumptions, if you fix the top and bottom points of the line at some given IQ level and you increase the number of stops of ISO available, then you effective reduce the slope of the performance curve (camera C in the image below). And while, say ISO 100, may not be better, all the subsequent ISOs would.

Alternatively, if the slope of the performance line stayed the same, the overall image quality at the lower ISOs would improve (camera b). 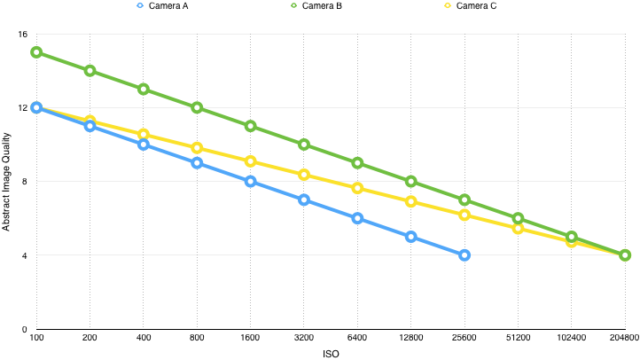 But what if Nikon were instead to, as the DXOMark’s test data has shown for the D5, not to draw the line in the sand. What if instead they simply say let the IQ degrade.

If that’s the case, and sadly at least in the case of the D5 that very much is the case to a very high degree, then the whole argument that a higher high ISO number translates to better IQ at lower ISOs.

For the D5 to hit its impressive looking ISO 3.2M, Nikon has let the SNR slide to a anemic 3.2dB and the dynamic range drop to 1.38 stops.

You should not be impressed by these numbers; they are not impressive.

Yes, yes, yes, I know I’m talking about the D500 here but citing numbers for the D5 as evidence. The board storks appear to be largely the same. There’s a lot of hype about the highest ISO setting, but the images are pretty much unusable.

And fundamentally this is why I’m disappointed so much with this round of Nikon cameras.

Even though I use Canon gear, I’ve always respected Nikon for not readily compromising their image quality as such, or at least as obviously, to deliver their cameras and lenses to market.

And I have to ask, given the actual performance, who wants these high ISO settings?

Most people seem quick to point to photojournalists. But I have to ask what good does it do them?

Newsprint has a dynamic range of about 40:1, which is a bit more than 5 stops. Coincidentally that’s about where the D4s and many other sports/action/journalism cameras bottom out. At 1–2 stops there’s not much left for their to be any tonality in the picture. It would be line art, if the noise wasn’t decimating any actual detail.

I’ve ranted on this for two long now, so let me wrap this up with 2 points.

As far as the D500 goes, the performance at sane working ISOs is quite good. If I was a Nikon user, and I was looking for a new camera for my wildlife photography, the D500 would be at the top of my list. Make no mistake, the D500 as a tool is capable of producing really good images as long as you don’t buy into the hype about ISO 1.6M. Had Nikon simply capped the camera at ISO 100K or 200K, I wouldn’t be going on about marketing over quality.

Secondly, we photographers, shouldn’t stand for this kind of crap inflationary marketing nonsense. It would be one thing, one really awesome thing that I’d be thrilled to see and talk about, if Nikon delivered ISO 1.6M with the same kind of image quality that they have been delivering at the highest ISOs in their other cameras. But they’re not, it’s not even close.

This kind of behavior is what leads to “ISO wars” or “megapixel wars” with all the manufacturers racing to see who can put the most useless big number on the box because they seem to believe that they need to have similar numbers to their competitors to sell cameras. This simply should not be something we consider acceptable as photographers at any level. Buying a DSLR, or really any interchangeable lens camera, is in so many ways a statement of our investment in the art and craft of photography. We buy these tools because we care about the images we’re trying to make. This is our hobby; our profession. Something we take seriously. We should expect the camera makers to raise the minimum standards, or at worst keep them them same; not relax them to get big numbers to put on the boxes.

I would say no, at least not by that standard. While the D500 is a very solid camera, it’s not good enough to make up the smaller sensor and resulting smaller pixels. IQ for the D500 falls somewhere between slightly behind (dynamic range) to a stop behind (noise and tonal range) to more than a stop behind (color sensitivity) to the D4. If you’re not happy with images above ISO 8000 on the D4, you’re probably not going to be happy with images above ISO 6400 on the D500.

That said, I can’t really tell you what you would or wouldn’t find acceptable. Really the best thing you could do would be to rent a D500 and test it out yourself.