One of the things that I’m always looking for in new products is how they will improve something I do or open up some new avenue for me. When Nikon announced the D5 and the 153-point AF system, my first reaction, before I saw the actual field was, “That’s going to be awesome!”. Given the massive increase in the number of AF points, I hoped Nikon may have figured out a novel way to do something like the 399 “point” system in Sony’s mirrorless A7, but in a DSLR and not as extreme.

When I finally got around to not only seeing the pattern but really thinking about how AF systems behave, well, the whole thing really started feeling like marketing numbers more than useful progress.

The way I see it, there’s utility in both AF point density and how much of the frame the AF covers. The question, in my mind at least, is how much utility do I get from the changes. 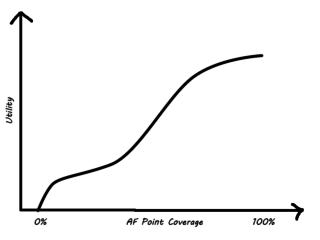 With respect to field size, I think there’s a pretty sharp jump just going from no AF points to a single AF point. But as you increase the size of the field, the gains aren’t as great utility until it gets out close to the rule of thirds points. Beyond that, there’s still some utility to be had by making the pattern bigger but the gains diminish as you get close to the edges

With respect to the density of the AF system, in my experience there’s pretty much a threshold level where it enables consistent accurate servo tracking. Below that point, there isn’t enough density to really accurately track things with servo AF. However, once you hit that point, while there still might be tiny gains in accuracy or tracking capabilities, the gains aren’t nearly as relevant as they were when you tip over that threshold point. 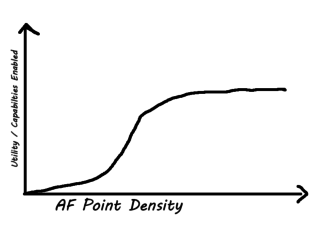 So back to the D5. Nikon increased size slightly, not really so much that it slides up very far on the utility curve. They also increased the density of the AF patter a lot, but at least in my experience the D4s is already in the density range that puts it up over the hump on the curve.

Yes, there’s certainly some increase in utility for the photographer from the new system, but the biggest win is for Nikon being able to put a really big number in the marketing literature.

On the other hand, over in Canon land, the Canon 1DX mark II will have the whole 61-point AF pattern available at f/8. In my opinion this is a far larger improvement than Nikon’s new AF system with all it’s points, and for a number of reasons.

To start with in terms of coverage below f/8 the D5 and 1DX aren’t all that far apart — the D5’s field is a smudge wider and the 1DX’s field is a smudge taller. You’ll be hard pressed to convince me that an AF point half an AF box further out is going enable any new kinds of usage. That leaves point density, and this is the part where I’m real skeptical. In my experience with the 5D mark III’s AF system (which has the same AF sensor as the 1DX, but isn’t backed by a dedicated processor or the RGB color meter for color tracking), I’ve yet to run into a situation where the density of the sensor has let me down in AF tracking.

Above f/5.6 though, both platforms suffer rather significant losses in AF point coverage; with Canon falling down far more than Nikon does. In either case, but definitely in Canon’s, expanding the AF field at all, let alone to the whole pattern at f/8 would make a huge leap up the coverage utility scale.

I realize there’s a bit of an unspoken assumption in all of this about why performance at f/8, or above f/5.6, is relevant. To this I’d argue that technology has enabled working in ways that really weren’t practical in the past. With a camera like the D4s, 1DX, almost certainly the D5, and to a lesser extent the 5D mark III, you can easily shoot at ISO 800 or 1600 with impunity, unlike what you could do with film or even early digital cameras. With better higher ISO performance, you can instead opt for smaller lighter lenses without giving up the situation stopping shutter speeds. Where you needed a 500 f/4 and some luck with film, you can use a 400/5.6 with a 1.4x TC on a digital camera at ISO 1600 and get generally just as good of results. Slower lenses, use less glass, tend to cost less, and ultimately are lighter, smaller, and easier to pack and carry all day. However, if I can’t have my AF system operate at f/8 effectively, that tips the balance of utility on those smaller lighter lenses.

Enough hypothesizing, lets look at some practical case. In all of the following images, the red AF boxes are the points available above f/5.6.

This was shot on a 5D mark III with a 100–400 mark II and a 1.4x TC, so I was limited to only being able to use and track with the center AF point. If the lion hadn’t been walking, I could have focused and recomposed with the center AF point and insured that I had a better composition. However, because this was a tracking situation, if I tried to focus and recompose I would have had an out of focus image.

Nikon’s coverage with the D4s, underscores my point about the utility of broader coverage. If I was shooting with a D4s, I could have used the AF box 2 positions above the center and aimed to keep that on the lion’s near eye. That would have shifted the lion’s head forward and up in the frame making better use of the available resolution as well as the potentially including the front paws in the shot.

One other thing I hadn’t noticed before I started putting these images together is that the D5 appears to reduce the f/8 AF coverage relative to the D4s.

The next image is the landscape counterpoint to the previous one. The tiger is walking left to right across the frame and again I’m attempting to track it with the AF system. Fortunately in they case the tiger is moving parallel enough to the camera that I can focus on its shoulder instead of the eye, head, or nose, in an effort to get a bit more of the animal in the frame.

Again, the idea of the utility of more coverage is, or should be, obvious. Neither of Nikon’s AF systems at f/8 have an AF point that really works in this image ideally. Given the conditions, my best choice would have been a point 1 or 2 points to the left of the center, held on the shoulder. Ideally though, I’d want to use the top right corner box and keep it on the cat’s eye or close to it.

Canon’s current situation again fails miserably at this, with only the center point being usable. I think the ideal point would have been the top most one, one column in from the right held on the side of the nose just under the eye.

The other point I wanted to talk about there though is the density of the AF points. If you look at the D5 image, the assist points (small dots), really up the density, but I don’t see that they contribute much. You can’t select them individually; they only become active if you allow the camera to pick what to focus on. That may or may not work for any given situation, but it certainly removes control from the photographer.

More interestingly, there are noticeable gaps in the assist coverage. If the premise of a non-user-selectable AF assist point is to provide better continuity when tracking, then I would expect that continuity to be consistent across the field. After all, nothing that you’re tracking is always going to be so cooperative that it will stay in the 2 or 3 wide columns of points that have assist points in them. Moreover, if the camera can track and focus reliably across the gaps, then what does it need the assist points for?

Again, I think we see here that while there’s undeniably utility in having more density in the field.

With this image, I want to look at the density question a bit more. Here we see an eagle in flight, based on some rough estimates, it’s about 100 feet from the camera when I shot this image — it might be a bit closer it might be a bit further away. At 100 feet, the depth of field of a 400 mm lens at f/2.8 is 3.2 feet.

In an image like this there are two essential focus related factors.

So we now have a complex subject being tracked. And the first thing I noticed in this image is that the head is not under any of the AF points in the D5 pattern. At least based on the AF system display there’s a quite substantial gap in coverage from the central cluster of points to to the first cluster.

Actually it’s interesting, that Nikon’s system has a relatively narrow (3 column) central stack, flanked by 2 distinct separate wing stacks on each side. On the other hand, Canon maintains the same density across the entire wing with only a single gap from the center to the wing.

My point with this image, is that the eagle is in focus. In fact, if the metadata is correct, I shot this with the center AF point and the up/down left/right expansion points, not even the entire field, and still had no problem keeping the bird in focus.

So with that said, let me wrap this up with a couple of points on bias and perspective.

I shoot wildlife mostly, and so that colors my perceptions regardless of how much I attempt to compensate for that. I don’t, for example, shoot sports, so I can’t say for certain how much of what I’ve said applies there. I can speculate about how useful AF point density is based on my knowledge of the technology, but that’s not hard won practical experience.

Maybe more importantly, in terms of bias and perspective, I’m a heavy user of f/5.6 telephoto zooms coupled with teleconverters. If Canon upped the AF system to f/8 or faster for the full pattern and a central point at f/11, I would be simply over the moon. Even if there was no other significant improvement to the AF system as a whole. Others aren’t going to fall into the camp, and so they’re necessarily going to care about other things more.