For some time I’ve had intermittent issues with one of my 580ex IIs, but never could put my finger on it, literally. Touching the flash would often fix the problem. On some rare occasions it just wouldn’t fire, or would fire at the wrong power, but never often enough for with enough regularity to be something I could put my finger on. Sometimes it would happen with the camera in portrait orientation, then on the next frame not at all….It was infrequent enough that I never really looked into it until I read a post at the end of a thread on Canon Rumors about dead flashes and Pocket Wizards.

My problem, and it’s the first place I’d start looking before I took the flash in for repair, was that the hotshoe mechanism had somehow worked loose. Specifically the clamps weren’t fully clamping down, which would let the flash wobble in the camera’s hotshoe breaking contact with the camera.

There are two ways to check this without actually having to take your flash in for service (or take it apart and fix it yourself).

First is if the flash obviously wobbles in the hot shoe. In a properly adjusted flash, there will be a little be of play—the cam based clamping mechanism in the 580Ex II simply can’t produce the mechanical force that the older screw-down clamps could—but the flash shouldn’t noticeably rock or wobble.

The second method is to check that the “clamp tabs” actually close all the way. Start by pulling the rubber hotshoe off the flash’s foot. Then slide the lock lever to the fully locked position. You’ll see 4 small plastic tabs, 2 on each side, that extend down towards the metal foot (they’re indicated in the image below by the arrows). 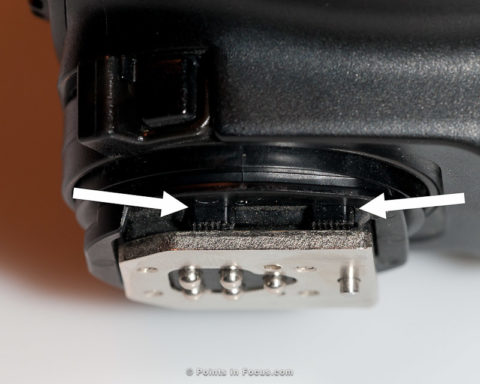 On a properly adjusted foot they should just barely touch the metal plate. In the flashes I’ve checked, there’s enough of a gap to slip a sheet of regular typing paper paper between them, but not much more. If there’s a large or noticeable gap something in the mechanism has worked loose and needs to be tightened.

For disassembly and tightening instructions, check out this guide by Jan Shim. Also pay special attention to the shock warning noted in that guide, working inside of a flash gun has the potential to be lethal if it is not properly safed first.