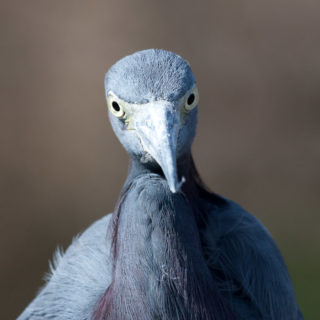 This isn’t turning out to be all that great of a bird season. I hit three sites today, Loxahatchee National Widlife Refuge and Green Cay Wetlands in Palm Beach county and Long Key Nature Center in broward county.

Boots were on the ground, both literaly and figuratively, at Loxahatchee just after 0700. And there wasn’t an awful lot going on. Like usual herons and egrets were seen around (I saw Great  Blue and Tri-colored herons, and Great Egrets at least), so were Gloss and White Ibisises. There was a Cardinal in another stand of pines, but it was far to distant to make any serious attempts at photographing it. A friend of mine who was also there found a pair of Pileated Woodpeckers on her way in. There were also some raptors around, at least 3 Red-Shouldered Hawks and I saw what I believe to be a Snail Kite, though that was only a flyby and I’m not 100% sure I identified it correctly.

Green Cay was the backup site for the morning, and I’m finding it to be increasingly important to have a backup site given the lack of birds this year. Boots were on the ground there around 0830-0900. Unfortunately Green Cay didn’t do all that much better than Loxahatchee. The usual suspects herons, egrets, moore hens, cormorents, woodstorks,  etc., were  around. My friend spotted a Cardinal by the entrance. There was a Red-shouldered Hawk perched very close to the walkway where it turns in the northwest corner (just after the little island). There really wasn’t a whole lot going on other wise, I spoke with a  woman who had seen some Blue-gray Gnatcatchers, on the large island in the northeast corner, though we couldn’t find them when we went to look. We ran into a really nice Little Blue Heron on the way out, that was very approachable.

What I didn’t see any sign of was the male Northern Harrier which I’ve seen the past two times I’ve been there. I have no idea if it has moved on, or was just down or in a tree somewhere that we weren’t.

While this isn’t necessarily helpful, there was a Wood Stork feeding by the boardwalk to the left (west) of the entrance that was having particularly good luck–hitting something like 8 or 10 fish in less than 10 minutes. I found this interesting, I’ve never really seen the Wood Stork hunting behavior; basically they try and kick the fish into their mouth.

Long Key nature center isn’t exactly my favorite location, it has never panned out well but I was reminded by a woman I spoke with, that there is a fairly decent rookery there, so on the way back I decided to check it out. Alas, nothing, there was an Anhinga and a Great Egret and that was all I could see, there was absolutely nothing in the rookery. Of course, I’m not sure that it wasn’t too early in the season though for that site. I’m going to check back there in the next month or so.

I also spoke to a gentleman who had been over at Wakodahatchee to check on the nesting Great Blue Herons, he said they were on/in the nest and weren’t doing much. I’m going to take that as a pretty good sign that there are eggs, and in about 3 weeks there should be chicks hatching.

Given the situation with birds at these sites and this season in general, I’m going to start wandering a bit more over the next month or so.